As it was Ganesh Chaturthi last week, I wanted to read a Ganesha related book for the story time. As I and the kids were already familiar with the Amma series books, this time again I selected  ‘Amma Tell Me About Ganesha’ book written by Bhakti Mathur. 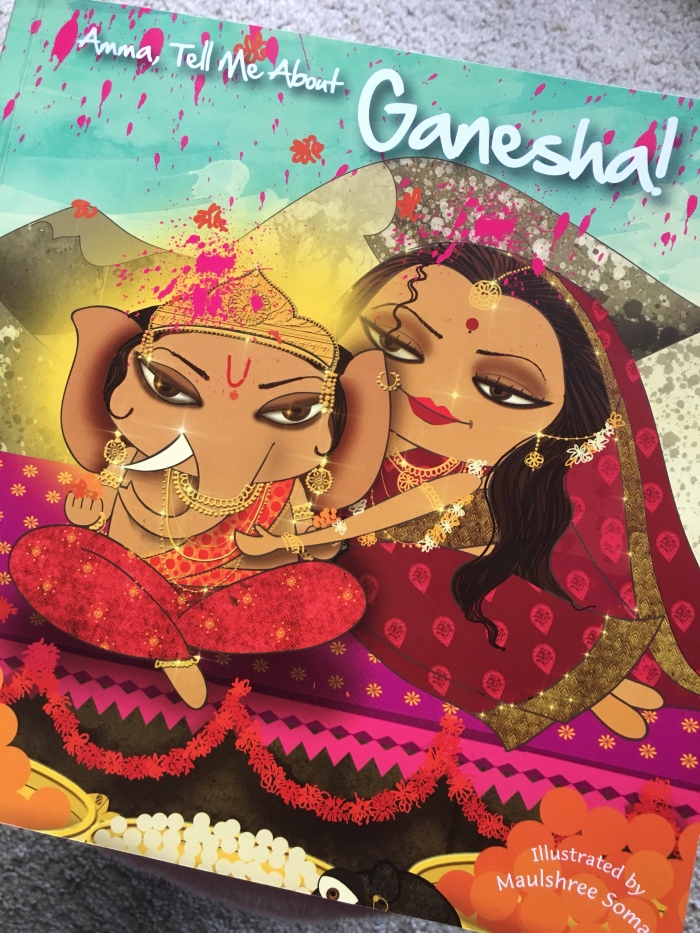 The book starts with the Ganesh celebrations and the visarjan(immersion) of the Ganesh ji in the sea. As my kids were not familiar with the huge Ganesh Pandals which are installed during the festival back in India, I showed them few photographs of it for better understanding. Before starting to read the main story, I  also explained to them about why we immerse the Ganesh in the water? Who are his parents and where does he stay? This little introduction helped them well to connect with the rest of the story.

The story is about how GaneshJi  got his elephant head and how well the Amma explains to her children Kalki and Kaka about it. The story is written beautifully  with marvelous illustrations done by Maulshree Somani. I loved the way the Story includes the Chants of “Ganapathi Bappa morya Agle baras tu Jaldi aa”.This time too my kids were very curious to know about the story related to their favorite god. In between the story session, they came up with how they celebrated the festival .

After the story session I planned for an activity related to the book. This time I planned to do a Ganesh craft with the kids. I wanted the craft to be as simple as possible because I was handling many kids all alone.  I found this craft on Pinterest and thought of giving it a try. (can’t find the link to the source)

I already did the outline of the Ganesha and the eyes along with the colorful trunk cutouts. The kids just have to color the Ganesh ji and glue the trunk cut out on its face. 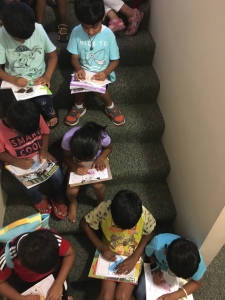 I am glad that the kids could manage this craft without much hassle.

The story session later ended with some snacks and student of the week giveaway.

2 thoughts on “Amma Tell Me About Ganesha!”